South Park The Fractured But Whole 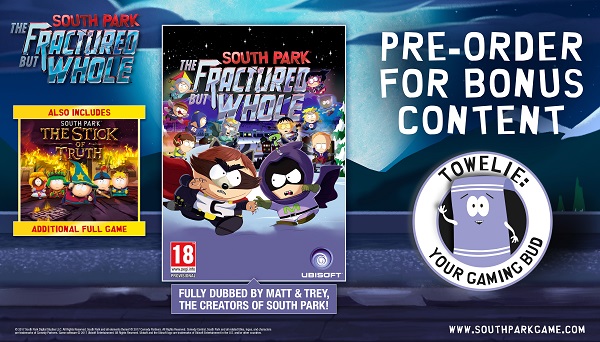 Pre-order now to get Towelie, as your gaming bud.

Pre-purchase to start playing South Park: The Stick of Truth for free!

From the creators of South Park, Trey Parker and Matt Stone, comes South Park: The Fractured but Whole, a sequel to 2014’s award-winning South Park: The Stick of Truth. Players will once again assume the role of the New Kid and join South Park favorites Stan, Kyle, Kenny and Cartman in a new hilarious and outrageous RPG adventure.

In South Park: The Fractured but Whole, players will delve into the crime-ridden underbelly of South Park with Coon and Friends. This dedicated group of crime fighters was formed by Eric Cartman whose superhero alter-ego, The Coon, is half man, half raccoon. As the New Kid, players will join Mysterion, Toolshed, Human Kite and a host of others to battle the forces of evil while Coon strives to make his team the most beloved superheroes in history.

There are no reviews yet.

Reaper Shop hardware is now moved to Shop.Rigz.in so kingly use the given site for purchasing computer products. Dismiss